When it’s mostly about the Scorpio star sign, we can’t deny its nature of being occasionally mysterious and strong willed in real life. What we may see here is properly that any Scorpio-born individual may find it easier to gain the limelight, especially when it comes to their great patience and high sense of responsibility like having what it take just to get any of their goals, targets, and dreams fully accomplished.

Moreover, a Scorpio man or woman usually owns some kinds of magnetic charms that not many people can ever completely ignore. Through this post, you’re given an opportunity of understanding more about any other positive and negative traits of the sign with the help of Scorpio horoscope. What are they for real? Just have a quick glimpse at them now. First, let’s begin with Scorpio’s positive side. The most common words or terms that can best describe about the sign are determined, loyal, ambitious, and intuitive. 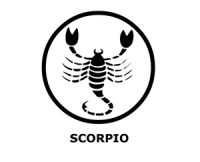 This term would best feature him without a doubt, since it means that whenever the Scorpio-born man has determined to do something, it will not be easy to make him lose his patience as well as get all his spirits dampened or simply deviate him from the path he has chosen. His high determination will be seen as his major strength.

Being admirably fearless would make a Scorpio man feel much better and help him to deal with any difficulty at any certain level no matter how complicated and difficult the situation will turn to be. This man born under Scorpio sign would never lose his deep sleep over any uncontrolled time and even great failure.

He’s mostly known for being extremely jovial and passionate about everything, but notice that it does not mean that he’s still immature like a child and appears careless at a few certain times. You’re coming across a mature and poised Scorpio man, which is supposed to be the most pleasant personality that you can begin with.

The term “loyal” would signify that you can totally trust a Scorpio man, since he will often stand by you as long as he’s got some certain promises he used to make before. Having a loyal Scorpio man around would be none other than such a big advantage.

Those ambitious Scorpios would target for any start and absolutely believe that they will certainly be present there. The most possible and strongest boosters for their high energy would be surely power, money and status.

Anyone who was born under this astrological sign, Scorpio, is assumed to be so intuitive that it won’t be too much to claim them to be the real minded readers. Such instincts owned by a Scorpio would assist him in making the right choices at the right point of time.

Then what about his negative traits? Let’s get a quick look into some of his most noticeable weaknesses below. His jealousy will be our first topic to discuss about.

As the Scorpio sign is mentioned here, it’s not wrong at all when we state it to be so possessive and envious about things. When that level of jealousy comes more often, it will absolutely disturb any kind of romantic relationship he tries to build up with his loved one. Do not let this negative feeling badly affect your peace of mind, Scorpions.

There are the Scorpions who seem so sensitive and easily hurt by any bad word or negative feedback by someone else. Thus, most of them usually find a way to turn back what that person dared to hurt them.

Have all possible questions addressed to our inquiry box on the topic “Scorpio Horoscope Traits” as there’s something that you have not caught up with.